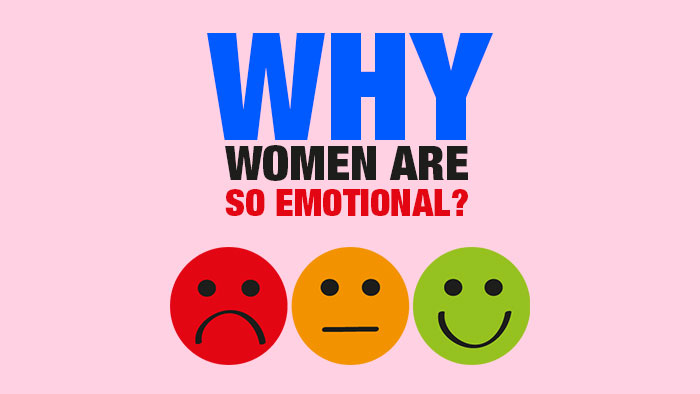 Women’s has been known to be an emotional behavior and it is the biggest question on why women are so emotional. They really are very emotional. But, don’t take it as a disorder, but accept that it is a fact. Reading this article will let you gain information that women’s are very expressive, garrulous and emotional.

The left and right brain: The structure of men’s and women’s brain are very different from each other and functions of brains also little bit differ with each other in way of working. In case of women’s both right and left sides of brain use by them, but in case of men they use their left side mostly. As people say that men’s are more logical. The left side of brain is responsible for logical reasoning and problem solving skills. Whereas right side responsible for creativity, facial perception and for generating emotions. So left side of brain takes care of IQ and right takes care of EQ. This is the scientific reason why women’s are so emotional.

Women are better at expressing:

Womens are more expressive by talking. During the time of stress human body releases the hormone called Oxytocin.  For men and women these hormones work in different manner. During stress, the Oxytocin reduced by testosterone and men’s become aggressive and angry. And in case of women the Oxyticin enhanced by estrogen which result in nurturing and calmness. Women’s tend to deal stress by talking where as men are not expressive so they deal stress by reacting angrily or aggressively.

Amygdale activated – women feel more pain. When a person undergoes pain, an area in the brain called Amygdale activated. Amygdale is the part of limbic system which deals with emotion related to pain. Pain perceived by men and women differently. Women s is emotional do they feel pain intently and they are more vocal about their pain and seek treatment.

Men and women are different:

Women’s are more emotional as compare to man. This is one of the great differences between them. During the period of pregnancy, womens become more emotional. Lots of changes going in their body during this session. Women’s brain function in such manner that they cannot hide they feeling and they easily express it while men’s cannot.

Men are supposed to be tough:

The perception of being strong has been drilled into the mind of men’s since they were child. Men’s grow with the concept; they are men so they have to be strong. Most of the man expresses himself over a bad incident. Men are also emotional but they don’t express their feeling as women can do.

So this is small article on emotions of women’s which help them to overcome from depression and come out the guilt of feeling emotional from it.