As delicious as they taste, every diner knows that chicken nuggets and hotdogs aren’t exactly made from prime cuts of meat.

Indeed, most of us try and push the image of trotter or carcass to the back of our minds when eating processed food.

Now, one photographer has laid bare the grisly reality of where our favourite foods come from – and it’s probably enough to deter you at least temporarily, if not for life. 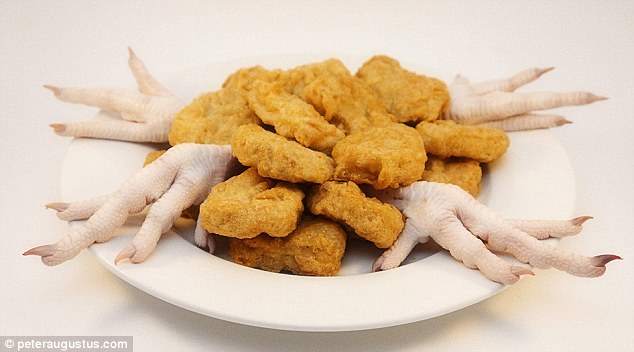 Taken by Texan-born Peter Augustus, they show popular dishes alongside the real, raw part of the animal they come from.

While nuggets are chicken feet, a ham sandwich is a pig’s trotter and a hot dog is an unappetising-looking piece of intestine.

Mr Augustus says the project – inspired by his move to Hong Kong – ‘is not meant to be repulsive, but to raise awareness’ of where popular dishes actually come from. 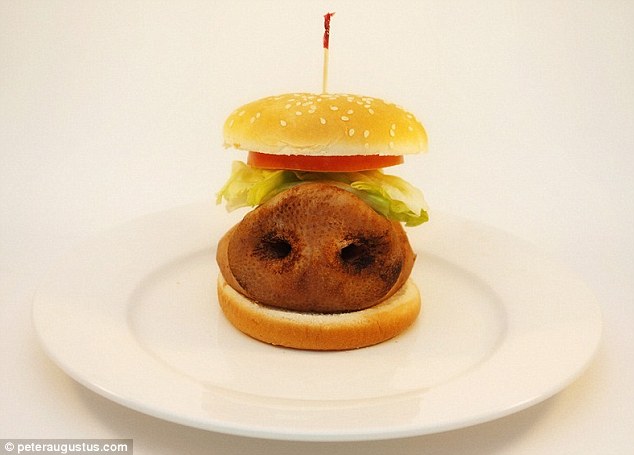 He said: ‘Arriving in Hong Kong for the first time, a city overloaded with visual stimulation, one of the most impactful scenes for me was the meat shops found in my neighbourhood of Sai Ying Pun.

‘As a foreigner from a major city in the West, most of us seldom see anything that even closely represents what kind of animal we are eating when we purchase it – it is always pre-packaged, nice and neat, showcased in an air-conditioned supermarket.

‘Being forced to pass by these meat shops on a daily basis with their pig heads, intestines, eyeballs and hearts hung on hooks out in the open lead me to challenge myself to view these shops as a normal place where actual food was being sourced every day, that ended up in my meal at a local restaurant.’ 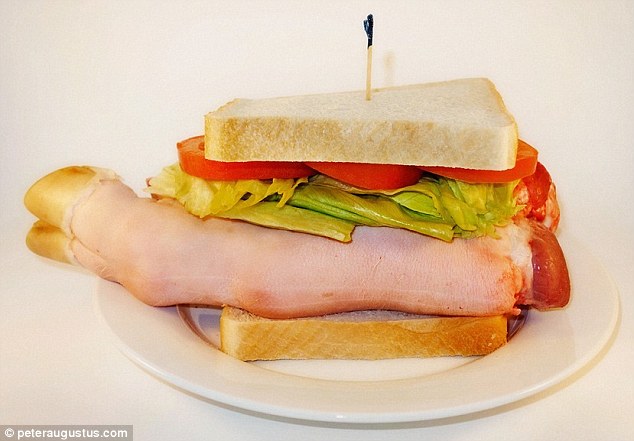 Mr Augustus – who is not vegetarian – says his work, ‘a personal therapeutic process’, explores the relationship that most Western societies have with the meat that they eat.

‘It’s a disconnect between what it actually is they are eating and what it was before it was prepared for consumption.’

He added: ‘Shot using a white background with lighting meant to evoke an American diner or cafeteria, I take out the clean cuts and replace them with a real representation of the animal the meat comes from. 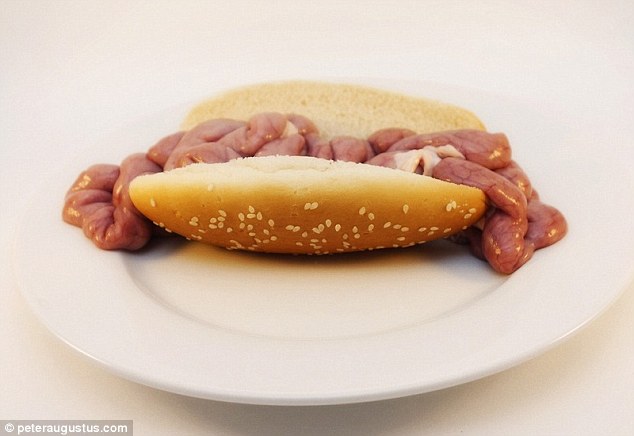 ‘By doing this, I hope to cause the viewer to take into account what the natural form of their food looks like.’

Mr Augustus believes his work ‘highlights a number of important debates’ – such as the longstanding debate of the quality of chicken and meat products and ‘the use of unnatural fillers and hormones in the animal products we eat daily.’

The project itself was a labour of love – an involved traipsing around until he found a friendly bucher who could speak sufficient English.

‘She thought it was funny, as she could tell I was a little bit uncomfortable being surrounded all the raw meat,’ he recalls.

In fact, her main focus was food handling and preparation.

‘She didn’t understand why a white person wanted all of these things to photograph and was very concerned if I knew how to handle it properly.

‘She also told me how to cook and eat it, which I did not.’

However he admits the project has changed his eating habits. ‘I now make an effort to know where and how the animal I am eating was raised – and the results do dictate if I end up eating it.

‘Not to sound preachy, but I think if more meat eaters did that, I think there would be less animosity from overly passionate vegans.’