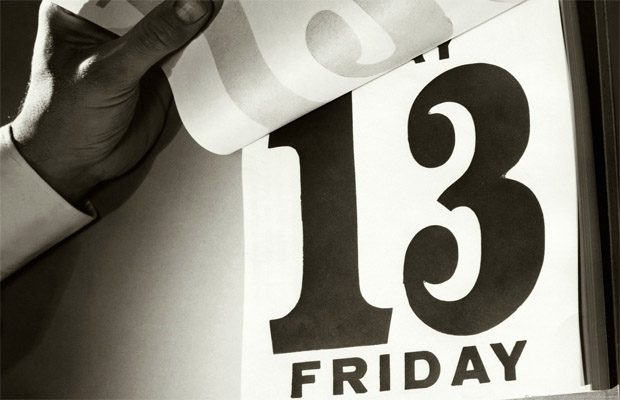 2) Read Fact#1 but chose to skip pronouncing friggatriskaidekaphobia? Well, we have some bad news for you. If you’re to believe the experts at the Stress Management Center and Phobia Institute, North Carolina, people who are able to pronounce the name of this phobia are itself cured. Now if you’re gonna scroll up and try pronouncing the word, good luck to you!

4) On 13, Oct 1989, Wall Street saw one of its largest drops and the day was named as Friday-13th-Mini-Crash. Since then, Wall Street has strong inhibitions about the day. However, some actually turn this popular superstition to their advantage and trick people. So, better be careful fellas!

5) Interestingly enough, in San Francisco, there is no 13th street between the 12th and the 14th Avenue. Instead it’s called the ‘Funston!’ In fact, you’d find a number of buildings in India where the 13th floor is usually renamed and called the 14th floor!

7) A research paper published by the British Medical Journal, 1993 has observed that there were higher risks of accidents and calamities on Friday the 13th than on usual Fridays. So, buckle up and do station a ‘Nimbu-Mirchi’ on your car before leaving your place.

8) There are only five films with the title ‘Friday the 13’ that have been released exactly on Friday the 13th.

9) The Christian religion finds Friday the 13th jinxed because Jesus was crucified on a Friday, and hence forbids any new activity (birth, inauguration, marriage etc) on the day. Now this is serious, isn’t it? Time to don a ‘nimbu-mirchi’ or a horseshoe tee-shirt, guys! In fact, hugging a black cat might also do the trick for you.

10) According to the Gregorian Calendar, Friday the 13th occurs at least once in a year and can even happen up to three times in a year.

11) Apparently, there are three types of phobias attached with this day- friggatriskaidekaphobia, triskaidekaphobia (pertaining to the number 13) and paraskevidekatriaphobia (related to Greek Paraskevi for Friday). So, now you have more excuses to switch to an ‘Off day.’

12) A cognitive study by the North Carolina Stress Management Centre and Phobia Institute says that in the US, an estimated 17 to 21 million people suffer from a fear of Friday the 13th and also that the number is strangely shocking.

13) Most followed superstitions about this particular day goes like: