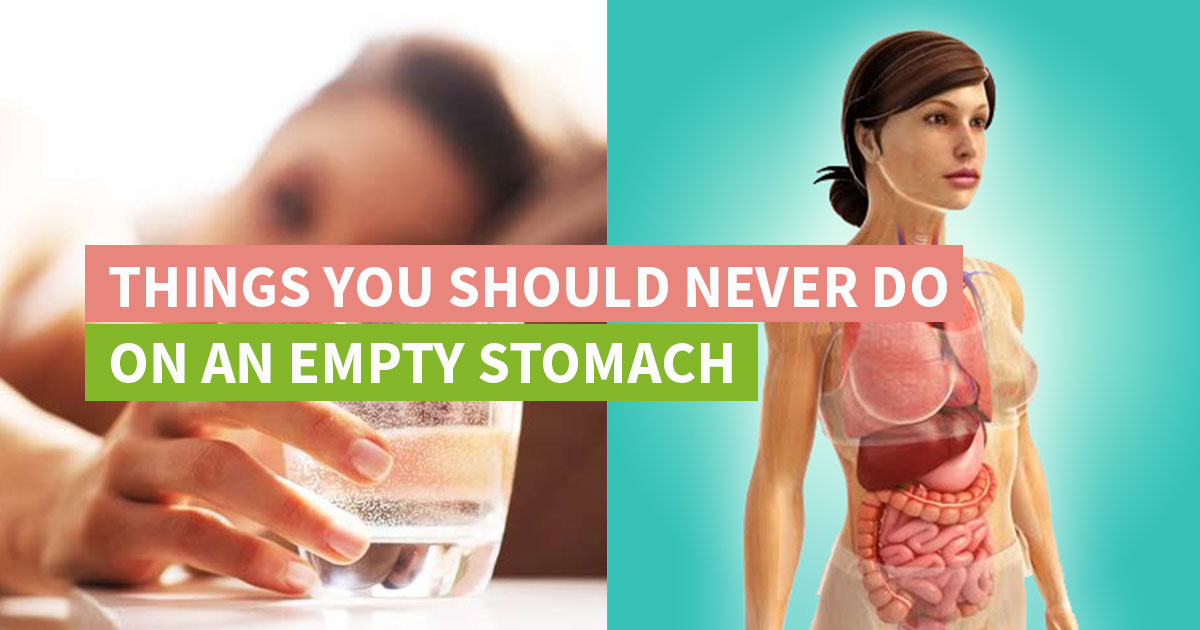 Whether it is a cup of black coffee or alcohol, here are nine things that you should avoid eating or drinking on an empty stomach.

1. A lot of people tend to take NSAIDs, which are nonsteroidal anti-inflammatory drugs, on an empty stomach. These include things such as aspirin and paracetamol.

Taking these types of medication on an empty stomach can potentially result in gastric bleeding and will also reduce the effectiveness of the medication.
The best thing to do when taking these pills in the morning is to wash it down with a glass of milk. Milk tends to lower the negative effects of NSAIDs. If milk is not readily available, large amounts of water can be substituted.

2. The consumption of coffee on an empty stomach can incite the production of an acid that might result in heartburn and acid reflux.

So try adding some cream or milk into your coffee and the fat will help ease your digestion and set you up for the proper absorption of nutrients throughout the day.

If you can’t seem to skip a drink, choose a cool, noncarbonated drink since they absorb a little more slowly. Try and pair it with a sandwich, preferably with some fats such as butter to ease digestion.

4. Chewing gum first thing in the morning can result in damages to the stomach lining. It has also been proven that people who chew gum regularly tend to prefer junk food over fruits and veggies.

So try switching to gums with natural sweeteners and avoid chewing gum for more than ten minutes even after a meal.

5. Have you ever been so hungry that you can’t fall asleep? Well, the same thing happens in reverse. When you don’t get enough sleep, you tend to crave more savory and fatty foods in the morning.

So the best thing to do is to have some dairy products before bed because they contain things such as magnesium and calcium that will help you get a nice, deep sleep that way you won’t be ravenous when you wake up and eat everything in sight.

6. Many people find that training while fasted (on an empty stomach) is better for fat loss but in reality, having just a little bit of fuel (food) in you can result in a much higher energy output.

If you like to do resistance training in the morning, then it is best to have some sort of carbs (or simple carbs such as fruits) before you train.

But if you insist on fasted training then we advise you do some form of aerobic exercise (such as jogging) instead since it doesn’t require as much energy as lifting weights.

7. It’s always a bad idea to go grocery shopping when you’re hungry, but apparently, it is just as bad when you go shopping while hungry.

So before you go shopping, either have a small meal that will take your mind off of food or just bring a list of things that you want to buy and don’t stray from it.

Furthermore, studies have shown that people tend to spend less money when they pay with cash as opposed to credit.

8. Drinking lemon juice first thing in the morning can have some seriously negative effects on your stomach lining. The most important thing is to dilute the lemon juice into plenty of water.

9. Research has shown that hunger makes us all less composed. It occurs because self-control requires energy and there’s already little self-control when someone is hungry.

That is why it is best to have a warm glass of water and a small snack before entering into a conversation with someone because it can help you be more amicable and less standoffish.