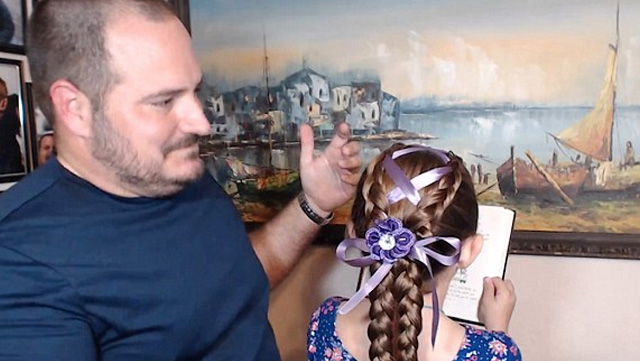 What does it really mean to be a good father? More specifically, what does it mean to be a good father to a young daughter? The men in this next clip are answering that question for themselves in an unexpected way. This story begins in Daytona Beach, Florida with single father Phil Morgese and his daughter Emma. The project was called Daddy Daughter Hair School, designed to help local dads get more in touch with their little girls’ hair needs. Though it started small, things have only grown.
The project started when Morgese realized how little he knew about haircare, particularly because Emma was so interested in experimenting with different hairstyles. Since Morgese has been raising Emma alone since she was just a year old, he’s now had a lot of practice in getting the kinks out (pun definitely intended). By reflecting on the process, he realized that learning these skills had brought him and his daughter closer together—but the hair knowledge he had was a lot to expect out of a newly single dad.

To meet the need, the Daddy Daughter Hair School was born. The program offers free classes to dads and daughters in the area, with the hope of bridging the gap and helping these men connect with their children. While Morgese was unsure how many people would attend these workshops at the beginning, he has now hosted more than 34 classes for over 300 dads. That’s a lot of haircare.
While the story seems simple on the surface, Morgese has a deeper mission in mind in teaching these dads about hair:

“It’s not about the braid, it’s about the bond . . . having a male role model is important to teach them how men should be in their life.”
For Morgese, whatever outdated beliefs there are about what men do vs. what women do in parenting need to go out the window. Because times are changing, so are parents’ duties. With the rise of non-traditional families and other family arrangements, it’s more and more important for moms and dads to be competent at a range of parenting skills, some of which they might not be used to. Fortunately, Morgese and his adorable daughter Emma are paving the way.