An ALS Ice Bucket Challenge went terribly wrong in Campbellsville, Kentucky, when four firefighters were seriously injured after participating in a group event, according to Campbellsville Police Chief Tim Hazlette. 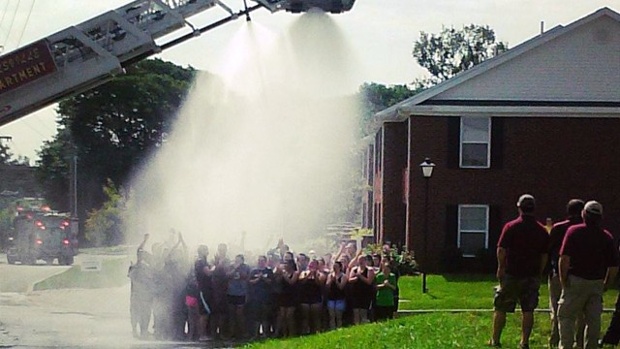 Electricity from a power line shocked the firefighters after they had sprayed water on students.

Crews from the Fire and Rescue Department were helping the Campbellsville University band with their video “Challenge” around 11 a.m. Thursday.

A photo obtained by CNN and taken by witness Tyler Arterburn shows the firetruck’s aerial ladder hovering over the challenge participants as firefighters inside the ladder’s bucket spray them with water.

Captain Tony Grider, 41, and firefighter Simon Quinn, 22, were inside the bucket. They were taken to Taylor Regional Hospital and then transferred to the University of Louisville Medical Center Burn Unit.

“One is in critical condition, the other is fair. Both have been admitted to the hospital’s Level 1 burn unit,” said KentuckyOne Health spokesperson, David McArthur.

Two other firefighters, Captain Steve Marrs, 37, and Alex Johnson, 28, received electric shocks when they tried to lower the bucket and an electric current traveled down the extended ladder, said Hazlette.

Marrs and Johnson were taken to Taylor Regional. Marrs was released and Johnson was admitted for observation, said Hazlette.

The incident remains under investigation but according to Hazlette, the ladder never touched the nearby power lines.

“From talking with the power company, if you get within a distance of 3 to 4 feet, the energy that surrounds the high-voltage wire will actually arc over another object, in this case being the personnel occupying the bucket,” said Hazlette.

In a statement posted on their website Campbellsville University asked for prayers.

“We express heartfelt sympathy and prayers for the families of the two firefighters who were injured,” said university President Michael Carter in the statement.

The ALS Association has received over $41.8 million in donations compared to $2.1 million during the same time last year.