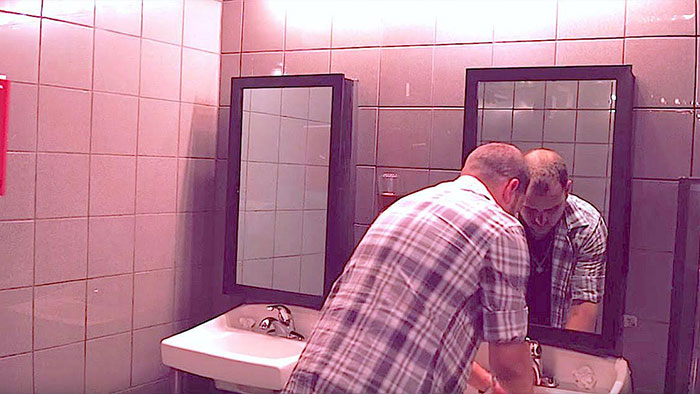 In 2010, a 26-year-old driver named Kris Caudilla crashed into a deputy, killing him. He was driving the wrong way when he slammed into the sheriff deputy’s car. Caudilla was charged with a DUI and manslaughter and is currently serving 15 years in prison. Not a day goes by that he doesn’t think about the man he killed, and his family. Now, Caudilla is trying to reach out to people outside of prison in an effort to prevent them from drinking and driving.

The folks at We Save Lives decided to ask a very important question to random bar goers: What if your decision to drink and drive was staring right back at you? So, they teamed up with Caudilla. In the video below, the inmate sits down in front of the cameras at his correctional facility in Florida. At the very same time, people out drinking at a busy nightclub all the way across the country in California are about to get a huge surprise.

Naturally, those in the bathroom are in disbelief when the man in the mirror starts talking to them. “Is this a joke?” Sadly, it’s not. Kris proceeds to tell these unsuspecting strangers his devastating story, in real time, right there in the bar bathroom. “Take a good look in the mirror. Should you be driving tonight?”

If Caudilla stopped just one person from driving home that night, he did his job.