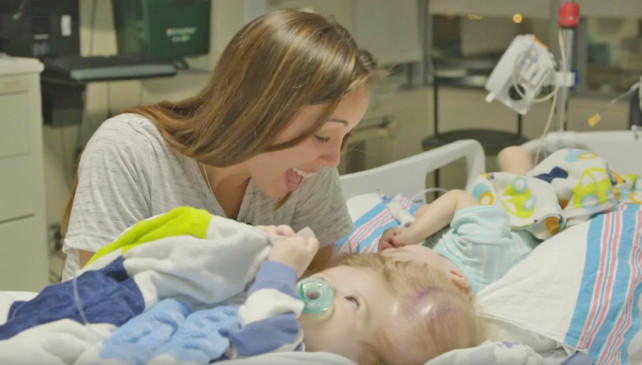 Christian and Nicole McDonald knew they were going to have conjoined twins while Nicole was still pregnant. Doctors suggested she consider terminating her twin sons, but that was never an option.

Instead, the family moved from Illinois to New York City to be closer to the Children’s Hospital Montefiore Medical Center in the Bronx, NY. It was there that they met Dr. James Goodrich, a surgeon who offered them hope that their conjoined twins could be separated successfully.

Their 13-month-old boys, Jadon and Anias, are conjoined at the skull. Separating them is a huge risk; the surgery could kill one or both of them, or cause long-term damage or disabilities in one or both babies.

After several surgeries, Christian and Nicole knew they had to leave the outcome to fate. There was simply no way of knowing what would happen. With heavy hearts, the couple decided to go through with the operation.

CNN’s Dr. Sanjay Gupta followed the parents during the agonizing day before the rare and risky procedure. The question loomed over Nicole and Christian’s head: would both their babies survive?

“And then there were two… Still in disbelief! God is good! What an amazing group of doctors we have! Mommy and Daddy are here waiting for you…We love you more than life,” Nicole wrote on Facebook.

Please SHARE this surgery to praise these doctors for their difficult work and to wish Jadon and Anias a happy “re-birthday”!

← Son Spots Mom In Homeless Video After Missing For 9 Months.
Things That Will KILL Your Relationship. Try To Stop Now. →