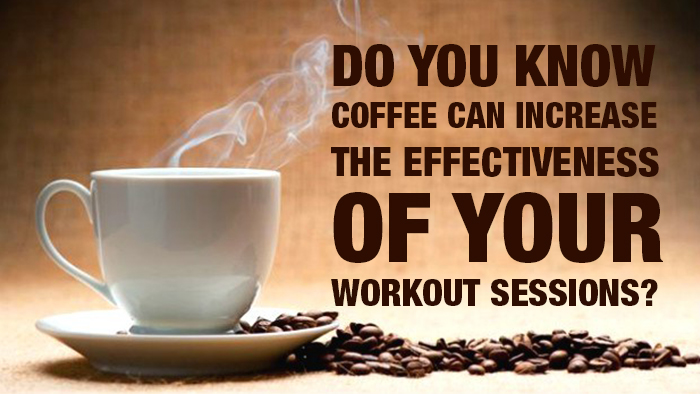 Here we have a fresh hearsay on the effects of the world’s most favorite beverage- coffee. Coffee and caffeine have always been a part of various investigations and a recent study published in the International Journal of Sport Nutrition and Exercise Metabolism has probed deeper into the past researches conducted on coffee, caffeine and athletics. The study has revealed that coffee can help in fuelling an athlete during difficult workout sessions. So, it can definitely help all those out there, who want to have an energetic start to the day or at the gym. Take a look at the details of the study and also how coffee helps us stay energetic.

Discovered about 1000 years ago, coffee is a popular beverage savored by people across the globe. Despite its prevalence in history since decades, there still remains a mystery and controversy around the natural effects of coffee and its prime active ingredient known as caffeine. The most widely used stimulant drug is caffeine and it is generally infused in the form of tea, coffee, chocolate and soft drinks. Being the most effective stimulant and psychoactive drug, caffeine is used by athletes as a means to improve performance in sports.

What happens when caffeine enters the body?

Caffeine is able to get totally absorbed by the intestines and stomach and it is after 45 to 60 minutes after ingestion that peak blood levels take place. Caffeine causes a number of body responses as soon as it enters the blood stream. It also has stimulant effect on the brain and there are other psychological effects as well. It causes an increase in pulse rate, blood pressure and stomach acid and fatty acids release into the blood stream along with breakdown of fat stores.

It was in the 1970s that scientists confirmed that caffeine influences body energy and this is the reason it plays a vital role in enhancing performance. Then in the 80s there was a switch in opinion and it was said that caffeine did not improve physical endurance. Finally the tables turned again in the 90s and new studies illustrated that 3 to 9 mg of caffeine per kg of body weight if consumed an hour before exercise can increase endurance. It is also generally believed that if caffeine is consumed in the form of a tablet then it can prove to be more beneficial in improving endurance.

Caffeine is used by athletes

Researchers and nutritionists have always been of the view that a cup of coffee can aid in burning excess amounts of body fat during a workout session. Some time back, Australian scientists also said that even a small amount of caffeine if consumed by athletes can allow them to exercise longer, in fact, more than one third extra time is said to be increased during workout post consumption of caffeine. So, a single cup of coffee is all that you need before a workout session to make you hit the gym with extra energy and stamina.

The Australian Institute of Sports Team has showed that caffeine triggers the body muscles to use the fat as a source of energy instead of the carbohydrate sugars. This is reason enough for many athletes to consume caffeine with a view to produce extra energy off their body reserves during a sports event.

Other health benefits of coffee

Coffee, no doubt has become one of the most effective pre-workout drinks that possess the calibre to bring out the best in you. Apart from fat loss and improved performance, here we give you a string of other health benefits that you can derive from “the wonder drink”, coffee.

Not only increased energy is the only benefit that is gained from coffee to push you through tough workouts but if you go for black coffee then it will give you a hike in terms of mental health as well. Yes, it helps to improve focus even post workouts.

If you have a cup of coffee prior to exercise then you are less likely to experience muscle pain during your session.

Coffee is packed with antioxidants and so it can aid in preventing various diseases like Alzheimer’s, diabetes and certain types of cancer.

Share this article if this information is useful. Sharing is Caring ..

Coffee and its UsesDo you know coffee can increase the effectiveness of your workout sessions?Drinking coffee is useful for exercise