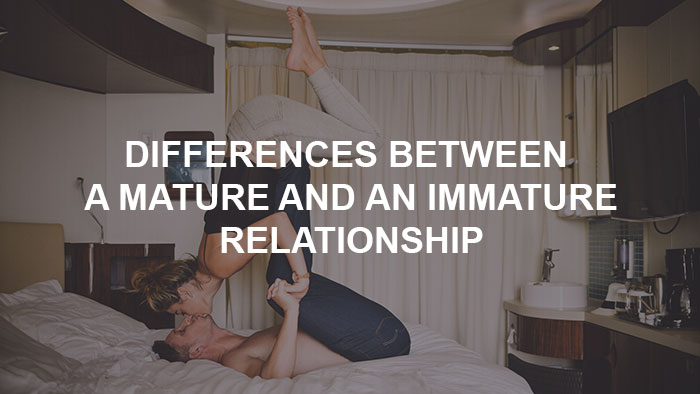 Ever wondered what makes a relationship unique? The level of maturity. Here’s a list of few basic differences that depict the difference between a mature and an immature relationship. Have a look.

In an immature relationship, doubts are always on the surface. While mature couples discuss things, the newbies on the floor tend to argue more. There is a massive difference when it comes to discussion and argument. The former is about reaching to a common consensus by mutual understanding; the latter is more about trying to prove your point by being loud or pushy (often).

There’s a lacuna in not-so-mature relationships, an apparent hiatus which seems to appear on and off. A few hours of separation is good enough to thrive this feeling. Sex and constant communication seems to be the only thing that seems to be help out. Mature relationships are self contained. There isn’t any empty space.

The concept of oneness

In an immature partnership, it is way too difficult to accept the differences. The couple in such alliances tries hard to look for something that can’t be found in the other one. They dominate each other, force themselves together and the result is nothing better than one flawed mesh of a human. Maturity in any relationship calls for two individuals looking to make two better people. The approach for the two of them focuses on making the partners more independent. It’s about pushing each other to pursue their passions, and interests.

Immature couples lack the motivation to come back to each other, more successful and more resolute for a great life ahead. The larger goals in life often go unattended. Mature relationships are all about keeping the big picture in mind. Small sacrifices do not fade away the essence of romance and that smothering love is replaced with motivated love. This happens only when you want to spend the rest of your life with someone and work hard to get that life.

Fighting is natural but expressing dissatisfaction via text isn’t. Mature couples do not spend their days bickering over petty stuff. When things are worked out face to face, the meanings can’t be misconstrued by emojis and autocorrect. Immature couples fuel the disharmony with incessant bickering and lengthy messages that are put forth only to argue and not to figure out the solution.

In a mature partnership, the two partners balance the shortcomings of each other. They are well aware of the positives and negatives that make either of them. In an immature relationship, the partners tend to use their counterparts to complete themselves. This is actually being selfish as opposed to matured alliances.

Mature couples are not scared of strangers and past relationships. There’s a level of confidence and understanding that makes a strong enough foundation to glide past all the distractions and threats effortlessly. Immature couples find people to be threatening. They tend to get a lil delusional and paranoid, probably because their love is superficial.

We do not have any right over someone’s past. All that matters is how committed they are in the present. Immature couples, however, fail to see life this way. Maturity in a relationship heals the wounds that are side effects of a past one is not proud of. The aim is to look beyond the mistakes and the flaws to beautify the future together.

A mature relationship makes life easy. Loving is natural and effortless. You don’t need to put in special and extra efforts to love your SO. In an immature relationship, enjoying each other is like a ton of work and angst.

When couples are mature, there isn’t a rule of thumb to call or text your partner every hour or so. Mature bonds aren’t all-consuming. This does not mean there isn’t love or passion. It merely says you can relax. If spending every waking moment with him/her by your side seems to be like oxygen for you, I am sorry to say you aren’t in a mature relationship.

If the ‘J Factor’ seems to spring up now and then, the relationship is definitely between two immature people. Although it’s natural to be jealous, in a mature relationship this jealousy is self-tamed or talked about openly. Immature relationships are about spying on your partner and checking their texts when they are away.

Maturity is about acceptance. If you accept your partner with an open mind and do not demand him/her to change in dramatic ways; congratulations! You are one lucky being to enjoy a mature relationship. Be happy that someone loves you for who you are.

The sense of fulfillment

If you find you aren’t with someone good enough to be your partner, or he/she lacks in some significant way, then you aren’t in a mature relationship. You’re in one of those immature alliances wherein you’ll always be looking at others with envy.

Maturity lays down the foundation of ‘fair and square.’ You would fight in as a couple even if you are mature enough, but, but you’ll fight like adults, not throwing tantrums. You’ll listen to respond and not react. And, you shall fight on the face, not over social media or text.

In a mature relationship, you don’t need to display your heights of intimacy. If you think sticking to your SO’s arms all the time would show how much you two are in love, let me tell you – grow up. This phase won’t last long and neither would your passion.

Couples in a mature relationship know who they are, and also know what they want out of life or the relationship. Transparency and clarity go a long way in such bonds.