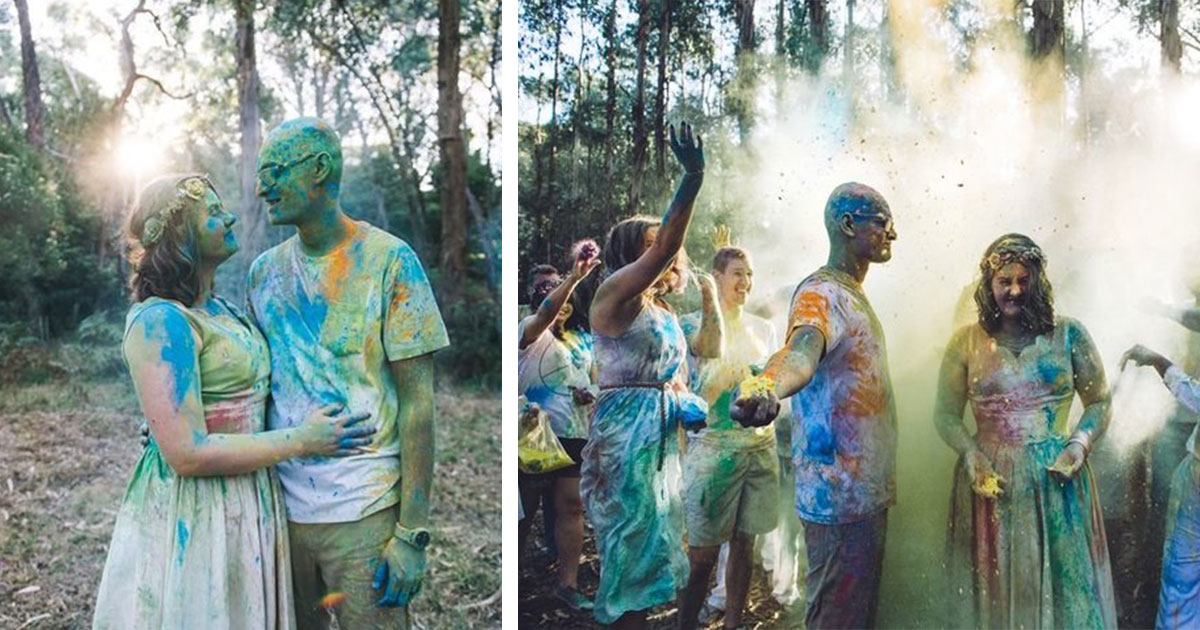 When Natasha and Pulindu, a.k.a. Tash and PJ, were planning their wedding in Melbourne, Australia, they thought long and hard about how to incorporate traditions from their different backgrounds. Somewhere along the line they took a left turn and instead planned something wild and unique to them: an all-out “color fight” that resulted in a spectacular mess and even more spectacular photos. 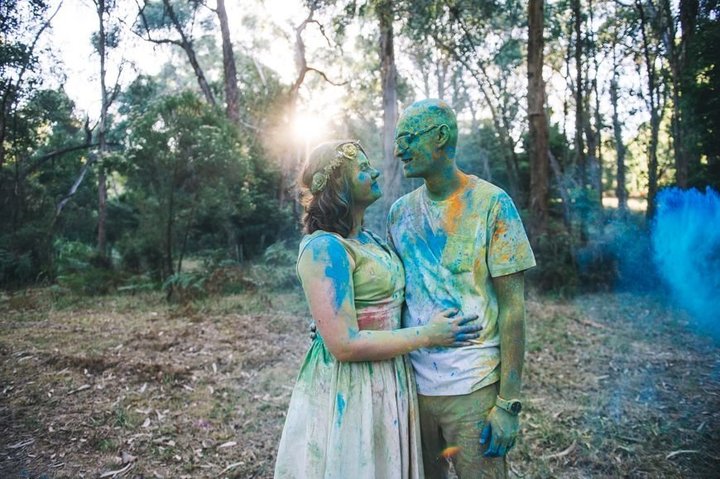 “After a while, it became apparent that neither of us were really ‘feeling’ those traditions,” Tash tells Yahoo Lifestyle via email. “Then my husband asked me, ‘If we could do anything, what would our wedding be to you?’ … The whole wedding was planned from beginning to end around the fact that we wanted to have fun memories of marrying each other and for those who were our guests — when they think of us as a couple, for it to be of smiles and laughing and fun.” 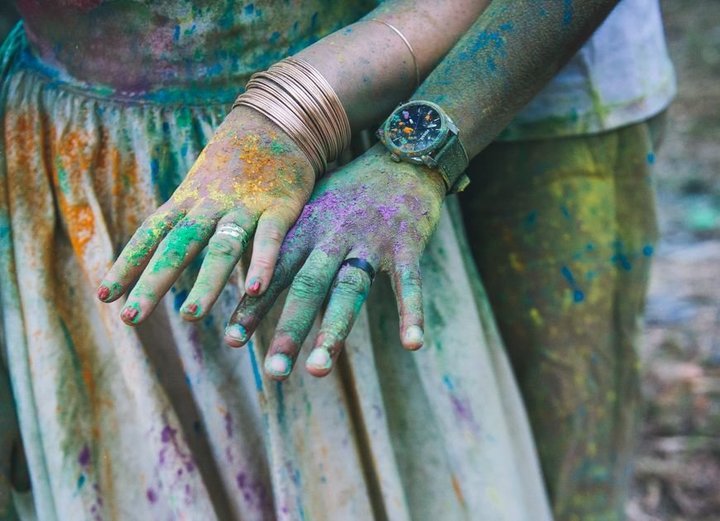 Tash and PJ, who are both software testers, spent months planning the “fight.” First, they decided to have the wedding on a friend’s blueberry farm, where there was plenty of room to get messy. Tash worked long hours in their kitchen mixing corn flour and food coloring, making a powder like what’s used during the Indian festival of Holi. Then they set about preparing their guests for this unusual activity by including it as an option on their invitations. Those who said yes received emails with instructions to bring sun block, mosquito repellent, and a cheap change of clothes they wouldn’t mind getting stained.

Tash, though, stayed in her wedding dress. 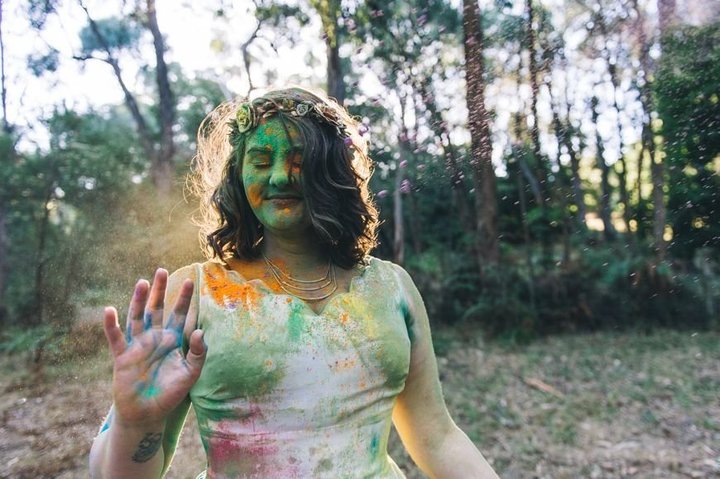 Here are the rules they came up with: They placed four hula hoops with four colored balls each on the ground. The guests, divided into four teams, had exactly seven minutes to collect as many balls of the opposing teams’ colors as they could. Just to make things more difficult, people threw extra powder at each other throughout the game. The most important rule of the game, Tash says, was not to throw anything at the photographer. 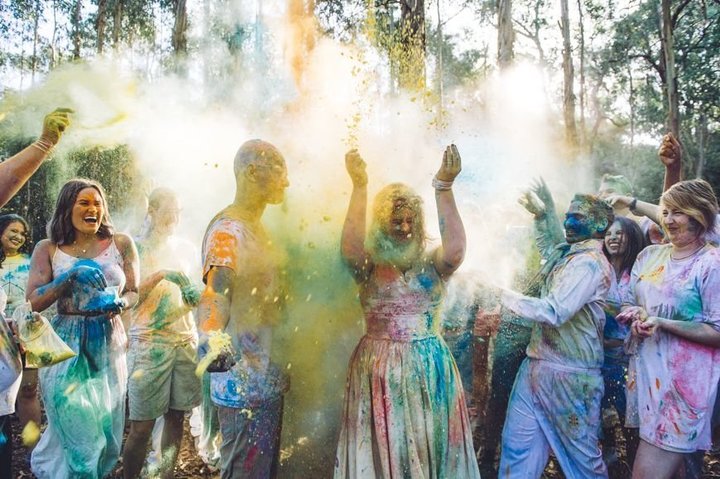 “With the powder flying, you really couldn’t see, so [the game] felt very high stakes,” Tash says. “Even my mum and dad played!”

As the guests changed and cleaned up with baby wipes, the newlyweds had a special couple’s photo shoot when they were still covered, head to toe, in colored powder.

“Those are my favorite photos of the whole day,” Tash says. She shared one of the pics last week on Reddit, where many future brides and grooms commented that they’d like to crib the idea from them. 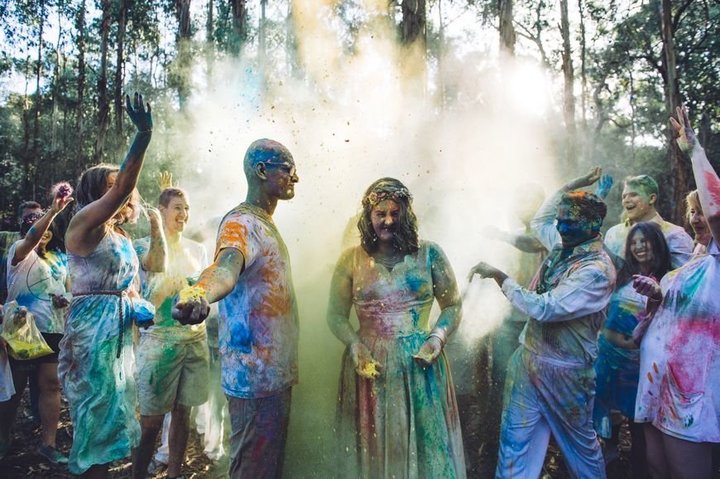 One slight problem Tash didn’t foresee was what happened when she remained in her powder a little too long. “I was the last to clean up because I got a bit swept up in everyone talking to me,” she says. “When I did clean up I discovered the one flaw of waiting that long — my armpits were stained green.” 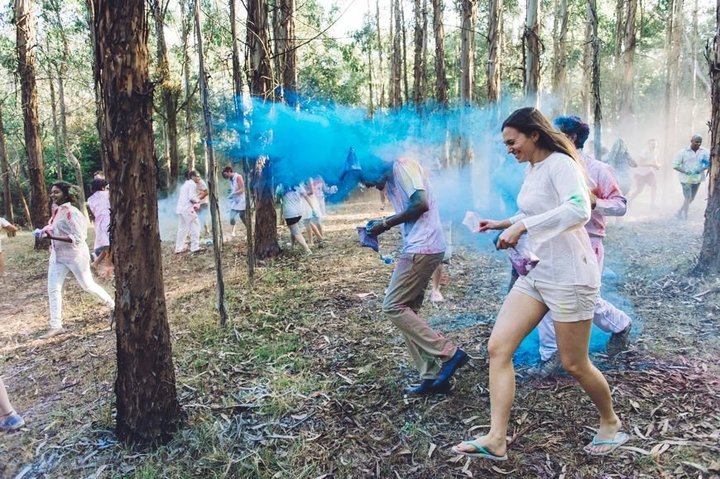 For the most part, however, Tash and PJ discovered that they could apply their experience as software testers to wedding planning. “We had fallbacks for almost everything, rain, hail, shine, or in Australia, bushfire, mosquitoes, snake and spider bites. What if a cow escapes into the reception? The farm is in a valley — will it get cold after dark?” 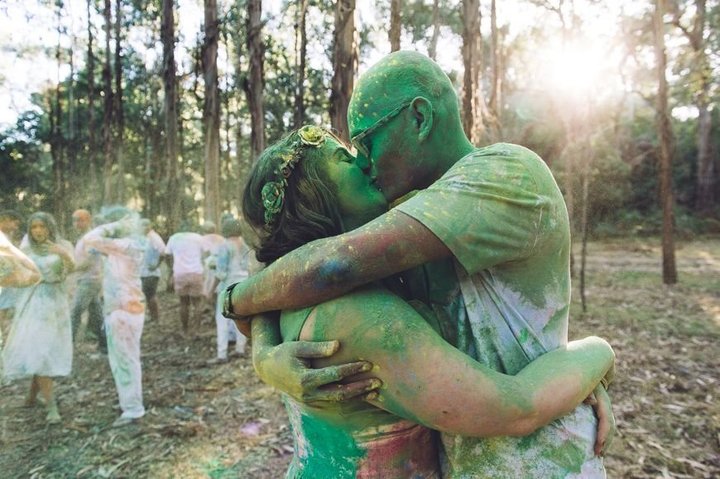 They were so successful at it, other friends asked for their help in their weddings too. Now, Tash and PJ have launched their own wedding-planning business, Indi Event Management.

“Now that we are finished with our wedding, we are thinking of other new fun, chaotic events people might like to have at their wedding,” Tash says. “Our philosophy is that weddings should show/demonstrate to people why you’re getting married, and that means finding something that shows the joy you find in each other.”