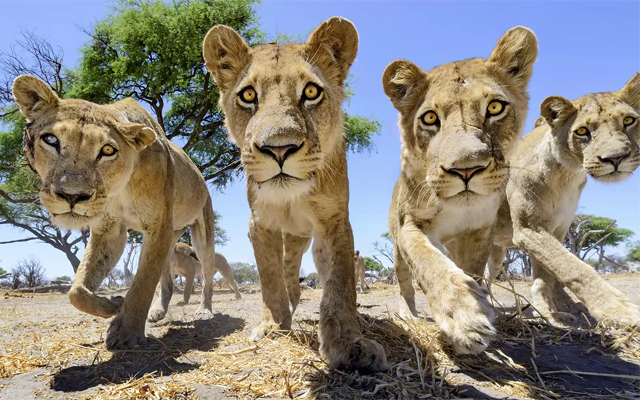 File this one under up close and personal. While recently on assignment in Botswana, wildlife photographer Chris McLennan mounted a camera onto a remote control car and drove it into a pride of wild lions.

Not much happens at first, with the four-wheeled intruder only piquing the interest of two inquiring lionesses. But as the car inches nearer the napping pride, each big cat quickly perks up and strides over to it. The result is a succession of gorgeous close-ups: stoic faces, piercing yellow eyes, terrifying canine teeth, and prodding paws.

The four-minute video was uploaded to YouTube on Nov. 22 and has since gone viral, collecting 1.6 million views.

The apex predators are threatened by a range of factors, including habitat loss, scarcity of wild prey because of overhunting by humans, and retaliatory poisoning by herders and farmers after lions kill their livestock.

If the situation doesn’t change dramatically, some experts predict that lions could be extinct in the wild in 10 to 20 years.