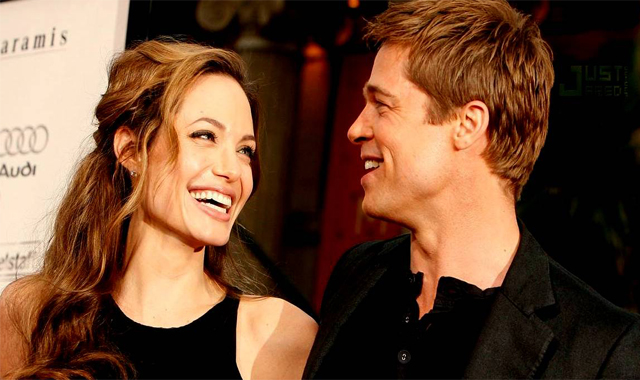 Brad Pitt and Angelina Jolie were married Saturday in Chateau Miraval, France, a spokesman for the couple tells the Associated Press.

The pair reportedly married in a small chapel in a private ceremony attended by family and friends. Pitt and Jolie obtained a marriage license from a local California judge, who also conducted the ceremony in France.

Brad and Ange: Their Love Story Through The Years

The couple’s six children were part of the wedding ceremony. The actress walked down the aisle with her eldest sons Maddox, 13, and Pax, 11. Daughters Zahara, 9, and Vivienne, 6, threw petals, while Shiloh, 8, and Knox, 6, served as ring bearers.

The actor was back in front of the camera days after his nuptials. He was spotted Thursday on the set of his next movie with a new ring on his ring finger. See the pic!

In his 2011 interview with Parade, Pitt opened up about his relationship with Jolie.

“One of the greatest, smartest things I ever did was give my kids Angie as their mom. She’s such a great mom. Oh, man, I’m so happy to have her. With a partner like Angie, I know that when I’m working, the kids are happy, safe, and prospering. And when Angie’s working, she knows she has the same,” he said.

When it comes to tabloid reports about their personal lives, Pitt said: “I mean, how many stories have you read that aren’t true, stories about me and Angie being married or fighting or splitting up? And when we don’t split up, there’s a whole new round that we’ve made up and we’re back together again! We’ll get married when everyone can. We’re not splitting up. And we don’t have a seventh child yet.”
Pitt and Jolie in 2005’s Mr. and Mrs. Smith.

And when asked if he’s a happy man, he replied: “I put much more emphasis on being a satisfied man. Happiness is overrated. There has to be conflict in life. You get to a plateau, and you’re spurred on to the next plateau, the next direction, the next season. I’m satisfied with making true choices and finding the woman I love, Angie, and building a family that I love so much. A family is a risky venture, because the greater the love, the greater the loss. You’re putting yourself on the line. That’s the risk we take. That’s the trade-off. But I’ll take it all.”

“I always wanted a great love affair,” she said, “something that feels big and full, really honest and enough. No moment should feel slight, false, or a little off. For me, it had to be everything.”

When asked if their children are the reason she and Pitt stay together, she said: “The children certainly tie us together, but a relationship won’t hold if it’s only about the kids. You also must be really interested in each other and have a really, really wonderful, exciting time together. We do. Brad and I love being together. We enjoy it. We need it, and we always find that special time. We stay connected. We talk about it. It’s very important. If Brad and I are strong and happy, then our kids have happy parents, and that’s the best thing we can give them.”

“There’s never a period when Brad and I are pulled apart,” she continued. “We are not separated for more than three days, ever. We stay really connected. We actually don’t go out much. It’s funny. We’re very homebound. We’re very much Mommy and Daddy in our pajamas.”

“I feel sad for someone who has never known love,” she added. “Love elevates. Brad knows me completely, exactly as I am, every part of me. He loves me. The kids love me. They know all my flaws and all my oddities. And they accept them. And so I can feel complete. You know, Brad would joke about me having this conversation about love. Love? It’s such a funny word. Brad can find certain phrases of poetry for it. I’m terrible at it. But I know it means wanting the best for the people you love, putting their interests above your own, always. Love does that. Love is what you live for.”