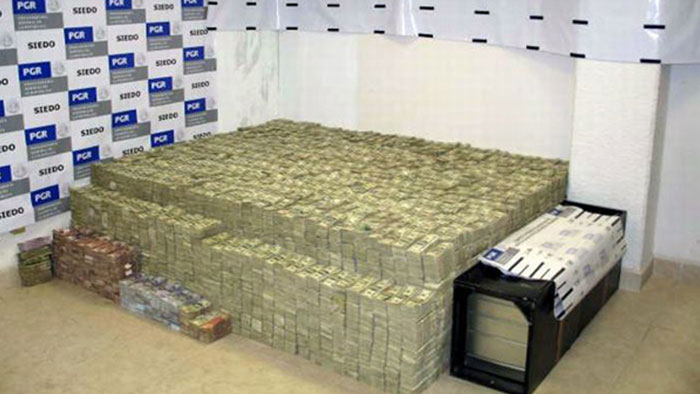 A Mexican drug lord’s house was busted and let us just say… everything you would assume about a drug lord’s house is totally true. Actually, any house owned by any drug lord is probably going to look pretty similar to this. The PGR (Mexico’s office of La Procuraduría General de la República) announced a successful drug raid on a Mexico City home and published pictures… and. Wow.

Who know that being a methamphetamine producers could result in something so… awesome? (Aside from the whole “arrest” thing.)

Raids like this one have typical loot, like a gun a with golden Virgin Mary on the handle.

This drug lord had a gun collection bigger than most museum’s.

There’s no surprise that there is a grotto with a hot tub….

And lots of exotic animals.

There were eight lions on this property. Eight.

And also a rare white tiger.

Rare, stolen and illegal art was found throughout the house.

A cash pile this size is approximately $200 million.

So much so, their personal protection is typically gilded.

Here’s what you should take away from this story: don’t do (or make or sell) drugs, kids. Because if you do, your piles of cash, golden guns and pet panthers are going to get taken away from you and you will go to jail for a long, long, long time.