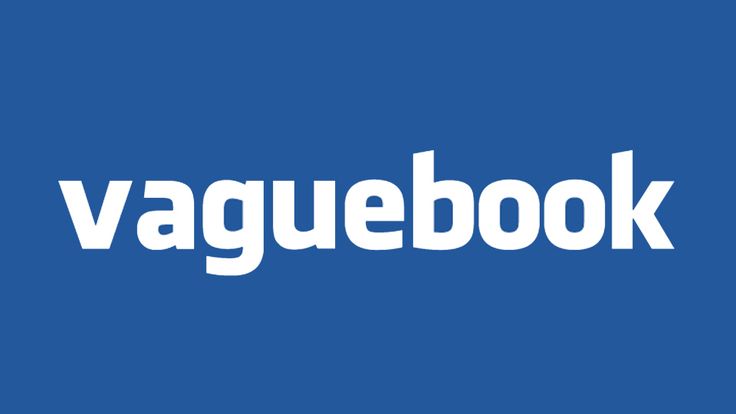 Vaguebooking has been responsible for a lot of discontent on social media. For those who may not know what vaguebooking is, it’s the act of posting a status update about a specific thing or person but providing absolutely no details as to who they are or what the thing might be. It drives people nuts and here are five reasons vaguebooking may be destroying your relationships with friends, family, and even your significant other.

The scenario: You vague-book post about someone not getting off your back about something. Insert a sad or angry face and post. You feel better having ranted.
The danger: Nobody has any idea who you’re talking about so they start assuming. Some may assume you’re talking about work, some may assume you’re talking about a significant other, and others still may assume your parents or someone else entirely. This causes them to feel discontent toward this other person even when they did nothing wrong. This can lead to friends hating your significant other, people thinking your parents are worse people than they really are, or it could even start problems among your friends. This can lead to pressure on you to do something about a problem that doesn’t exist! Save yourself the effort and save them the frustration. Either keep it to yourself or add in the details so everyone has their anger pointed in the right direction.

2. It will probably make your problems worse
The scenario: It’s pretty much the same scenario. You complain about an unspecified something or someone. Add an angry face or a sad face and post.
The danger: While a little anonymous trash talking on Facebook may make you feel good in the short term, it does little (read: nothing) to help you on the long term. Your problem still exists and since you’re doing literally nothing to fix it other than complaining about it on Facebook, your problem will continue to exist. What’s worse is when that unspecified something or someone finds out that your status is about them. Then you’ve not only not solved your problem, but now you have something or someone angry at you for talking smack on Facebook. Plus, those sorts of problems should be handled internally anyway. You don’t need to be airing your own (or anyone else’s) dirty laundry on Facebook. That shows people that you can’t be trusted and soon they’ll start walking away.

3. You will come off as an attention seeker
The problem: It’s the same scenario. You’re angry about something but you don’t know what to do about it so you vague-book it.
The danger: There will be some people that look at your post and think that you just want attention. There are some people who vague-book on purpose just to get likes or to have people ask them what’s wrong. They like the attention. It’s a behavior typically seen among kids, teens, and adolescents who haven’t yet learned the importance of proper communication. When you vague-book, people will start associating you with other people who participate in that kind of behavior even if you’re not that kind of person. In other words, people will start assuming you just want attention and that your attention seeking is juvenile. They lose respect for you and suddenly your circle of friends starts getting a little thin. 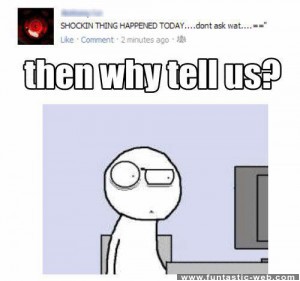 The problem: Okay so let’s assume that you’ve got friends who don’t think that you’re an attention seeker and that they’re smart enough to avoid the other two problems. Sometimes, people just hate vaguebooking.
The danger: This is why Google+ is a thing now. People go on Facebook and see vague-book statuses one after another. It gets old and defeats the point of social media (which is to be social). They may unfriend you, unfollow you, and if enough of their friends do it, may even seek another social network to get away from it all. Unfortunately for them, vaguebooking is on every single social network to an extent so they’ll never truly escape it. However, that won’t stop them for hating you for polluting their News Feed with what they consider to be senseless babble.

5. People may not take your real problems seriously anymore
The problem: You have complained about vague nothings for so long that when you have a real problem, your friends have grown numb to you complaining about it and simply don’t care anymore.
The danger: The problem and the danger is pretty much the same. If you vague-book about little nothings that don’t matter, then your friends will stop paying attention. Then when something truly serious comes along, they’ll look at your post about it as just another in a long line of complaining. By vaguebooking, you essentially destroy your own support system among your friends so when you need that safety net, you’ll find that it’s broken and you have nothing to catch you when you fall.

I’ve personally never seen one instance of vaguebooking being a good thing. There may be a good use for it but if there is, I’ve looked high and low and have not found it. You can save yourself a lot of trouble, stress, and possibly even a friendship or two by not participating in vaguebooking. It simply isn’t worth the trouble.