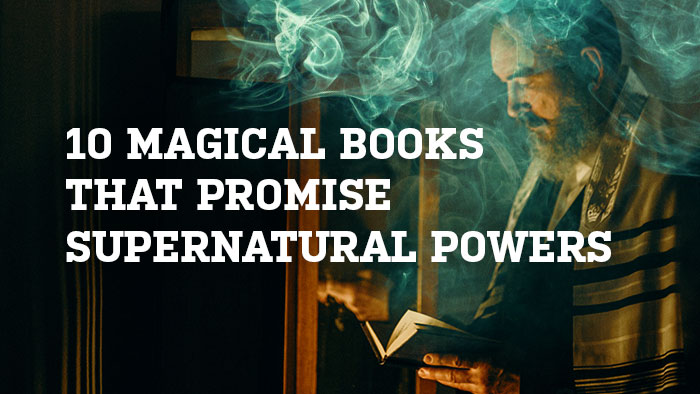 Humankind has long dabbled in the supernatural, lured by the promise of obtaining power and enlightenment.

The many cultures of the world, both modern and ancient, all tell tales of tomes with actual powers that were presented as the key to achieving communion with otherworldly spirits.

Below are magical books that promise real powers!

The Greek Magical Papyri is the name given by scholars to a body of papyri from Graeco-Roman Egypt, written mostly in ancient Greek, which each contain a number of magical spells, formulae, hymns, and rituals. The materials in the papyri date from the 100s BCE to the 400s CE.

The Black Pullet also known in French as “la poule aux œufs d’or” is a grimoire that proposes to teach the “science of magical talismans and rings”, including the art of necromancy and Kabbalah. It is believed to have been written in the 18th century by an anonymous French officer who served in Napoleon’s army.

The Ars Almadel is Book Four of the Lesser Key of Solomon, also known as the Lemegeton, a significant grimoire of demonology compiled in the 17th century by an unknown author. This particular book of the Legemeton provides a blueprint for constructing an Almadel—a magical wax altar, somewhat like a ouija board, that allows you to communicate with angels.

The Picatrix is an ancient grimoire of astrological magic. Originally written in Arabic and titled the Ghayat Al-Hakim, it dates back to the 11th century and spans a mammoth 400 pages of astrological theory. Alongside are spells and incantations to channel the occult energies of planets and stars to achieve power and enlightenment.

The Galdrabók is an Icelandic grimoire dated to ca. 1600. It is a small manuscript containing a collection of 47 spells and sigils/staves. The grimoire was compiled by four people, possibly starting in the late 16th century and going on until the mid-17th century.

Composed late in the 16th century by an unknown author, the Arbatel de magia veterum is a comprehensive handbook of spiritual advice and aphorisms. The Arbatel reads much like a mystical self-help book, stressing the importance of Christian godliness, productivity, positive thinking, and using magic to help instead of harm. Its kernels of wisdom include “live for yourself and the Muses; avoid the friendship of the multitude” and “flee the mundane; seek heavenly things.”

The Ars Notoria promises practitioners the mastery of liberal arts—geometry, arithmetic, and philosophy among them—through a lengthy daily process of visualization, contemplation, and orations. Through these orations, you can beseech God for intellectual gifts, including eloquence, heightened senses, wisdom, and perfect memory.

The Pseudomonarchia Daedonum is a catalog of 69 noble demons—prominent members of Hell’s monarchy—their specialties, and the methods of conjuring them.  The Pseudomonarchia Daedonum was written by famed 16th-century physician and demonologist Johann Weyer, who was greatly inspired by his former teacher, celebrated German occultist Heinrich Cornelius Agrippa. It is the appendix to his seminal work against the persecution of witchcraft, the Praestigiis Daemonum, hailed by Sigmund Freud as one of the most important books of all time.

Also known as the Liber Juratus Honorii, the Sworn Book of Honorius is a medieval grimoire and defense of ritual magic rumored to be the work of Honorius of Thebes, a mysterious, possibly mythological figure who has never been identified. The book begins with a scathing criticism of the Catholic church. The Church, a staunch enemy of the dark arts, has been corrupted by the devil, whose goal is to doom humanity by ridding the world of the benefits of magic.

10. The Book Of Abramelin The Mage

The Book of Abramelin tells the story of an Egyptian mage named Abraham, or Abra-Melin, who taught a system of magic to Abraham of Worms, a Jew in Worms, Germany, presumed to have lived from c.1362–c.1458.

If you are interested in any of the books, You can research more about it on Google.